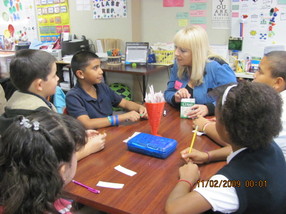 Beta Mu Zeta members enjoy being involved and giving back to our community both on campus and in the surrounding communities.

In Fall 2011, we received letters from students in a 5th grade class at Woodlake Elementary School in the Del Paso/Arden area of Sacramento. The letters stated that they attend a school where more than 95% of students live below the poverty line. Their teacher had created student groups and gave each group a college name in hopes of encouraging the students to want to attend college someday. The letters were written by the 5 students placed in the "Sierra College Group" and they were hoping we would send them 5 Sierra College T-shirts to hang on their chairs in the classroom to designate their group. Beta Mu Zeta was touched by the letters and immediately sent the shirts. But we knew we could do more...

Since Fall 2011, we have served as role models by visiting the entire 5th grade class on a regular basis. We listen to the real life stories these students shared about the difficulties they face each day and encourage them to dedicate themselves to their education.

After several classroom visits, Beta Mu Zeta financed a field trip for all the fifth and sixth grade students from the school, approximately 125 total, to come visit the Sierra College Rocklin Campus.  Busses delivered the students for a campus tour, visits to the planetarium and science museum, and a full lunch/motivational program complete with some of Sierra's students sharing the obstacles they had to overcome to make it to Sierra. The lunch also included dancing and plenty of fun, laughter, and learning. The smiles and hugs as the children boarded their busses back to Woodlake served as evidence that our hard work was well worth it.  The handwritten thank you letters from the students brought heartfelt tears of joy knowing we made a difference in their lives - so much so that we are continuing our mentoring program and look forward to forging even stronger friendships with the Woodlake students.